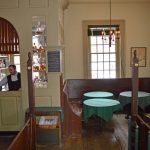 18th-Century Philadelphia, then the largest city in the New World, and the second largest city in the British Empire, was home to open-air markets that offered the bounty of the area. Delegates from the far-flung colonies, visitors from abroad—visitors of all kinds—marveled at the produce and goods on display at the city’s enormous central market.